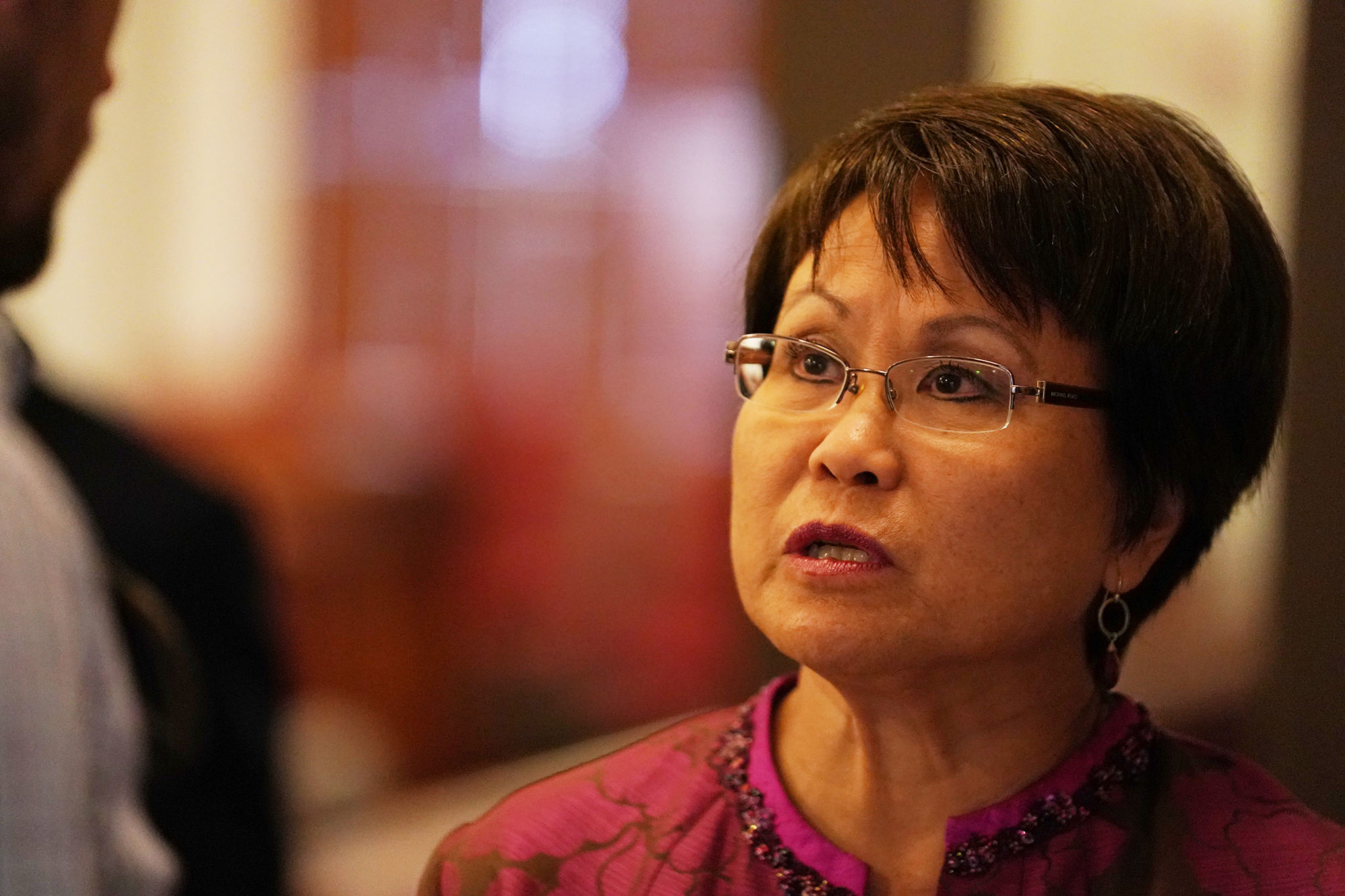 Before Donna Leong became the City and County of Honolulu’s top attorney in 2013, she was the chief legal officer for the Outrigger hotel chain.

And in the private sector, it isn’t unusual for a company to part ways with an employee and pay them off to make a problem disappear quickly, according to David Carey, Outrigger’s former CEO and president.

Now Leong is facing a federal conspiracy charge for allegedly doing just that – striking a deal with the police chief at the time, Louis Kealoha, and paying $250,000 in public funds to cut him loose as he faced a corruption probe.

The problem, according to her indictment, is that city law required the Honolulu City Council’s approval in this case. It’s up to council members to settle legal claims over $5,000 and to transfer funds “from an activity” if the cumulative total exceeds $100,000.

Lynn Panagakos, Leong’s attorney, declined to comment for this story. But in legal filings, she has indicated that Leong believed the deal was legal and that the former city budget director, who is debilitatingly ill with cancer, can attest to that.

The indictment’s depiction of Leong as a co-conspirator willing to sneak a shady deal past the City Council contrasts sharply with her reputation among friends and long-time colleagues who say she is a scrupulous and highly ethical attorney.

“She’s very forthright and very concerned with values,” said Bernice Littman, a retired attorney who has known Leong since the 1980s.

“I’ve always known her as a person of honor, so it must be particularly painful to have her honor impugned.”

Jane Sugimura, another former colleague, said Leong is a tough attorney and has always been honest and methodical.

“She knows her stuff, and she knows the law,” Sugimura said. “I don’t see her deviating.”

The success of the prosecutors’ case against Leong depends on whether they can convince a jury that she intentionally circumvented the proper channels, according to Alexander Silvert, a former federal public defender who brought the Kealoha conspiracy to the feds’ attention.

“Let’s say she says: There is a reasonable interpretation of the state law that allows this, and I, as a lawyer, thought that this was perfectly OK, right?” Silvert said. “I think that is a defense.”

However, the alleged efforts to keep the deal quiet raise some doubt about the validity of that argument, he said.

“The cover-up is what refutes the good faith belief,” he said.

From Obscurity To Battling With The Ethics Director

For much of her life, Leong stayed out of the spotlight.

Born and raised in Honolulu, the Punahou School alum earned an economics degree from Stanford University before studying law at the University of Washington, according to her resume.

She started her legal career in 1980 as an assistant city attorney and prosecutor for the city of Seattle for two years before moving back to Honolulu and taking a job as an attorney in the Honolulu Corporation Counsel’s office.

In 1986, she moved to Cades Schutte, a prestigious local firm, where she would stay for 20 years. There, she developed extensive expertise in legal matters pertaining to real estate, land use, zoning and property tax appeals, according to her resume. She represented the Ritz-Carlton Hotel Co. as it developed hotels in Hawaii and Applied Energy Services, also known as the AES Corp., as it built a combined heat and power facility at Campbell Industrial Park.

In 2006, Leong was named the senior vice president and chief legal officer at Outrigger Enterprises Group, a high-level position with one of the largest employers in the state. There, she worked with lobbyist Max Sword, who is now charged alongside her for the alleged conspiracy related to the Kealoha payment.

In a statement, Sword’s attorney Bill McCorriston said his client held Leong in high regard.

“He shared the company’s view that Ms. Leong was a competent and ethical lawyer and never had a reason to question her integrity,” McCorriston said.

Throughout the years, Leong kept a low profile. She volunteered for some community organizations, including as president of local nonprofits like Honolulu Dance Theatre, Kokokahi Gymnastics Team and the Early School. But unlike Sword, she wasn’t named to powerful boards and commissions. She wasn’t quoted in the media.

That changed in March 2013 when then-Mayor Kirk Caldwell appointed her to the position of the city’s corporation counsel. By the end of that year, Leong was getting heat for her treatment of the Honolulu Ethics Commission and its executive director Chuck Totto.

At the time, Totto’s office had just released an ethics opinion finding that the mayor unintentionally violated city gift rules by hosting a luau funded in part by political donors who did business with city government. The opinion did not find Caldwell had done anything wrong because the investigation found no evidence he knew which donors had contributed. Totto was also pursuing an investigation into Kealoha and his wife Katherine.

According to Totto, the ethics commission subsequently experienced an unprecedented level of scrutiny from Caldwell’s administration, including from Leong.

Totto told Civil Beat at the time that Leong began interfering with his mission to enforce city ethics laws by challenging his decision-making power and manipulating his office’s budget.

Totto and some ethics commissioners had a litany of concerns.

A request to Leong’s office for a $600 tracking device for an overtime abuse investigation dragged on for so long that the probe lost steam, according to Totto. The city initiated an audit into the ethics commission’s contract with an outside investigator and threatened to withhold funds unless the commission shared internal communications with city lawyers, Totto said.

Attorneys in Leong’s office allegedly told Totto that they had a right to issue ethics guidance to city employees separate and apart from the ethics commission’s advice – even if their opinions differed.

Caldwell defended his administration in an August 2014 letter.

“I strongly support the decisional independence of the Ethics Commission in order to meet its mission and objectives,” Caldwell wrote. “Independence, however, does not mean unfettered authority to act without constraints within the administrative structure of City government.”

Leong and Totto butted heads again later that year regarding Totto’s public declarations that votes by city council members with undisclosed conflicts of interest could be invalidated. The statement potentially threatened the city rail project, the biggest public works project in state history.

In 2015, Leong supported a policy, proposed by a Caldwell-appointed ethics commissioner, that would essentially muzzle Totto. It prohibited him from talking to the media without permission from the commission’s chair and vice chair. After a swift condemnation from Hawaii media outlets, the commission backtracked and rescinded the decision.

Ultimately, Totto quit in June 2016, citing his opposition to the treatment from commissioners and Caldwell’s administration. In response, Leong released a statement saying the city had done nothing wrong.

To people watching the drama play out, the situation raised questions about the motivations of Caldwell and his “attack dogs,” said Ken Lawson, who teaches law at the University of Hawaii and who tracked the Totto conflict closely.

“The question is why?” he said. “To me, something is rotten about the whole thing.”

Totto declined to comment on Leong this week, noting that he could be called as a witness in her case.

Mayor Proclaims Innocence Of His Appointees

Leong is one of the highest-ranking city officials yet to be ensnared in the federal corruption probe that took down Kealoha and his wife, a former prosecutor. Both Kealohas are now serving lengthy federal prison sentences for conspiracy, obstruction of justice and other felonies.

After Kealoha was served an FBI target letter in December 2016, Leong and Sword brokered the $250,000 deal with Kealoha and his attorney. It was presented to the Honolulu Police Commission as “take it or leave it,” according to former commissioners, and the members ultimately approved it in early 2017 over the objections of then-commissioner Loretta Sheehan.

The legal trouble for Leong became apparent in January 2019 when she received her own FBI target letter, which would hang a cloud of suspicion over her for years.

After being contacted about the letter by Hawaii News Now, Caldwell held a press conference and said he and Leong had mutually agreed she would go on paid leave.

She would stay on administrative leave for a year and a half until she formally resigned as of Aug 1, 2020.

“I had hoped to return to work to continue my service to the people of the City and to retire upon the expiration of your term,” she wrote in her letter of resignation to the mayor. “Your recent actions make clear that this is no longer an option, and, thus, I submit this letter informing you of my retirement without waiver of my rights under the law with regard thereto.”

Leong never specified what those actions were.

In a statement this month, the former mayor – who is fundraising for a run for governor –  said he still believes in the innocence of Leong, Sword and Amemiya, all of whom he appointed to their positions.

To Littman, Leong is not someone who would do anything illegal, or even bend the rules, for any reason.

“I think she is a person to whom morality really matters,” she said. “As a lawyer, she would do what she considered in the best interest of her client, but within the boundaries of legal ethics.”

Sign up for our FREE morning newsletter and face each day more informed.